The following image illustrates an Anchor tag helper, which targets the HTML anchor <a> tag : 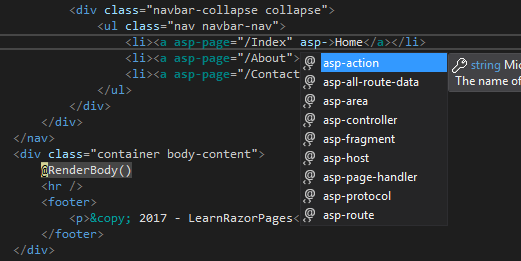 Tag helpers are an opt-in feature. They are not available to the page by default. They are enabled by adding an @addTagHelper directive to the page, or more usually to a _ViewImports.cshtml file:

Note: The value provided to the @addTagHelper directive is not enclosed in quotes. This requirement was removed when ASP.NET Core was at Release Candidate 2. However, if you prefer, you can still surround values in quotes:

Once a tag helper has been enabled, it will process every instance of the tag that it targets. That may not be desirable, especially so where tags don't feature special attributes that need to be processed. It is possible to opt in or out of tag processing selectively. You can use the @addTagHelper and @removeTagHelper directives to opt in or opt out of processing all tags of a certain type. Rather than pass the wildcard character to the @addtagHelper directive, you can pass the name(s) of the tag helpers that you want to enable:

You can opt individual tags out of processing by placing the ! prefix just prior to the tag name. The following example illustrates how that is applied to an anchor tag to prevent it being processed unnecessarily:

The prefix is placed in both the start and end tag. Any tag without the ! prefix will be processed by an associated tag helper . The alternative option is to opt specific tags in to processing at parse time. You achieve this by registering a custom prefix via the @tagHelperPrefix directive and then applying your chosen prefix to tags you want to take part in processing. You can register your prefix in the _ViewImports.cshtml file, where you enabled tag helper processing:

You can use pretty much any string you like as a prefix. Then you apply it to both the start and end tag, just like the ! prefix:

Only those tags that feature the prefix will be processed. The image below illustrates how Visual Studio shows enabled tag helpers with a different font:

For the sake of clarity, most developers are likely to use punctuation to separate the prefix from the tag name, for example:

This should reduce any visual confusion especially for designers when they look at the HTML content.